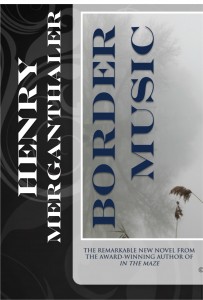 In Border Music, Merganthaler takes the pulse of the American experience through a powerful investigation of one of the past century’s most divisive and explosive of decades, the ’60s. Returning again to the voices he discovered for us in that turbulent period, Merganthaler is at the top of his long admired literary form. Merganthaler’s prose is carefully controlled yet always fresh and intellectually subtle as he reconstructs the halcyon days, circa World War II, of Clive “North” Lackman, a high school sports hero and all-around Great Guy who wants nothing more than to live in tranquility. But as North grows older and America crazier, history sweeps his family inexorably into its grip: His own daughter, Merry, commits an unpardonable act of “protest” against the Vietnam war that ultimately severs North from any hope of happiness, family, or spiritual coherence.

After long being out of print, Campanile is happy to return Henry Merganthaler’s 14th book – Border Music – to the ranks of the published.