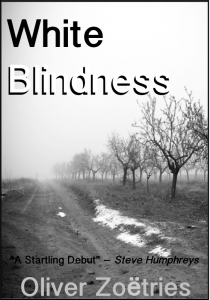 White Blindness is one of the few Eastern European novels likely to outlive the 20th century. Written in 1946, Zoëtries’s compelling and troubling tale of a disaffected, apparently amoral young man has earned a durable popularity because it reveals so vividly the anxieties of its time and place. Alienation, the fear of mutually assured destruction, spiritual doubt–all could have been given a purely modern inflection in the hands of a lesser talent than Zoëtries. The remarkable trick of White Blindness, is that despite these concerns, the story is not mired in period philosophy.

The plot is simple. A young Czech, Meurmnis, becomes embroiled in the petty intrigues of a local fixer and corrupt politician. Although Meurmnis’s participation is at first simple – even vague – his complicity lends a hand to forces beyond his control. The toxic after-math of the corruption begins to infect everything that Meurmnis touches, until his entire village is eventually destroyed.

Eventually, Meurmnis is brought to trial, but the trial’s proceedings are absurd, a parsing of incidental trivialities — so that the eventual sentence the jury issues is both ridiculous and inevitable. Meurmnis remains a cipher nearly to the story’s end–dispassionate, humorous, insightful and witty, but disengaged from what is happening all around him, and from the consequences of his own actions on those he claims to know and love.

Zoëtries has been commonly credited with reflecting his time and place with great insight, yet now we can see his extraordinary prescience. With the long view, Zoëtries’s novels can now be read as an indictment – and allegory – of our time’s complicity in the face of world-shaking events like genocide, climate change and cultural destruction. A novel that continues to resonate in the zeitgeist.