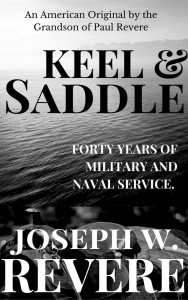 Campanile Books is excited to release a new edition of an American Original, by the grandson of American patriot Paul Revere.

The autobiography of Joseph W. Revere, a great American hero of the Mexican War and the Civil War (and grandson of Paul Revere).

At the age of fourteen young Revere entered the United States Naval School, and began a long career of service on sea and land in almost every portion of the globe. In his sixteenth year he sailed for the Pacific, and was attached to the squadron employed in suppressing the African slave trade. After narrow escapes from disease, wreck, and mutiny, he was detailed to the European squadron, and visited every country of Europe, and the Mediterranean shores of Asia and Africa. His knowledge of many languages secured him a favorable position, through which he met the most distinguished personages of the day. He was an eyewitness of the Carlist War, and served with the Mosquito fleet on the coast of Florida during the Seminole War. In 1838 he served in the first naval squadron which circumnavigated the globe. When in India he saved the British man-of-war Ganges from shipwreck, and was presented for his service with a sword of honor by the governor-general.

Throughout the Mexican War he was on the coast of California. At Sonoma he raised the first American flag north of San Francisco. Soon after this he resigned, and was employed by the Mexican government in reorganizing the artillery service. At the outbreak of the Civil War he offered his services to the general government and received a commission as colonel of the Seventh New Jersey Volunteers. The brilliant record of this gallant regiment, second to none in the service, has been largely attributed to the severe discipline it received under General Revere, whom General Hooker pronounced the best disciplinarian in the army. He was in all the battles of the Peninsular campaign; was promoted to the rank of brigadier-general, and commanded the Second New Jersey Brigade until after Fredericksburg. He was assigned to command of the New York Excelsior Brigade, and at Chancellorsville Revere’s brigade led the van in the desperate struggle after the route of the Eleventh Corps, when Howard’s men retreated before the impetuous onslaught of Stonewall Jackson.

Censured by General Sickles for his conduct in this battle, Revere was for a time deprived of his rank; the opinion of his troops, and of Generals Meade, Sedgwick, and other high officers, held him innocent of any offence. President Lincoln declared that he had been unjustly treated and restored to his rank, and he was subsequently named brevet major-general.

Get this classic of American history here >>